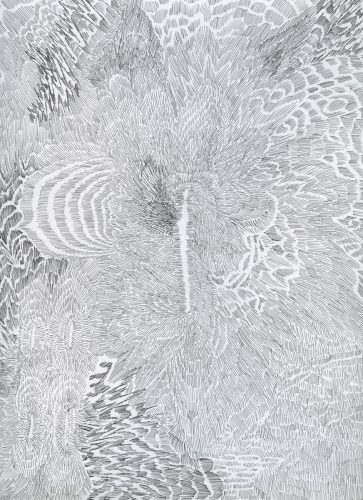 For his second exhibition at Galerie Hugues Charbonneau, Chambre réverbérante, Guillaume Adjutor Provost is presenting a selection of drawings from his most recent series entitled Flux. These drawings result from a number of automatic-drawing sessions whereby each pen drawing on paper was executed over the course of several consecutive hours. During these late-night drawing shifts, Provost found himself in a state of altered consciousness provoked by self-induced hypnosis – a hypnagogic state that allowed for a free-form exploration of his frame of mind on a given day. He likens the visual vocabulary resulting from this process to a flow of data streaming directly from his psyche.

Pulling from shapes and hidden symbols that emerged during these sessions, Provost created two sculptures that echo the Fluxdrawings. Fée du Kapital (Shift de jour)and Fée du Kapital (Shift de nuit)represent two pairs of casted feet dressed and bejewelled in boots and fabrics. The presence of these dismembered feet in space create a tension, seeming to conjure up spirits. To the artist, these anchors are stand-ins for a system in deconstruction, they could be considered the foundation to the building of a new order.

Chambre réverbérante results from Guillaume Adjutor Provost’s current desire to create a body of work that bypasses referentiality in order to access the raw internal processes of the psyche and by the same token, expose our relationship to the unregulated labour inherent to artistic work, both material and immaterial.

Guillaume Adjutor Provost lives and works in Montreal where he completed a doctorate in art and research at UQAM in 2017. He has received grants from the Conseil des Arts et des Lettres du Québec, the Canada Council for the Arts, the OJIQ and SODEC. His work has been shown in solo and group exhibitions throughoutCanada, France, Germany, Belgium, Catalonia, Lithuania, and Switzerland. In parallel, his practice has been highlighted through the Jean-Claude Rochefort award and the Claudine and Stephen Bronfman Fellowship in Contemporary Art. Since autumn 2016, he has been provided with a studio at the Fonderie Darling where he is currently showing a solo exhibition in conversation with Julie Tremble and Guillaume B.B. entitled “Vapeurs”, curated by Ji-Yoon Han. In 2018, he presented a solo exhibition at Bikini in Lyon, and participated in group shows at Critical Distance (Toronto) and TAP Art Space (Montreal), and conducted a research residency at Rupert Foundation in Vilnius, Lithuania.