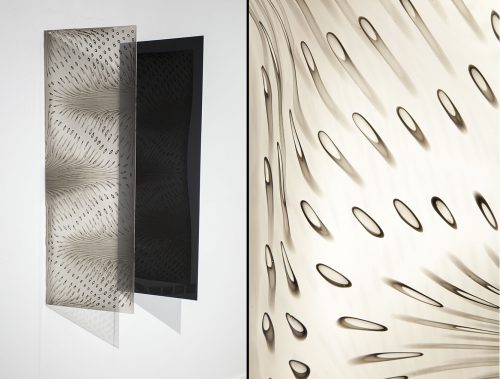 Galerie Hugues Charbonneau is pleased to present Julie Trudel’s second solo exhibition, featuring the latest development in her work with the materiality of colour. This series of approximately 10 three-dimensional paintings was created in 2015 during various artist residencies, and was presented in part at the Anna Leonowens Gallery at NSCAD University last fall.

With Bone Black and Titanium White—Transparency and Distortion, Julie Trudel continues to work with the self-imposed chromatic constraint she adopted in 2012, namely the use of pure black and white pigments which she simply dilutes in large amounts of clear acrylic medium. This time, however, she has innovated her approach by adding clear acrylic supports (also known as Plexiglas). Technical considerations at the end of 2014 led her to choose this material as a way to explore its material properties – transparency, reflection, reversibility and plasticity – in conjunction with her fascination for the translucence and opacity of paint. While experimenting with various types of plastics, light emerged as a central component and the paintings were subsequently pulled out from the wall to better enable the interplay of light and surface.

Each piece is created on a very thin sheet of Plexiglas painted on one side before being bent into three sections through thermoforming. Two sections are painted in flat black tints, giving them a mirror-like quality, or in white, which reflects light. The third section is clear and covered in a pattern of translucent dots that seem to break away from the surface, producing the illusion of movement and depth. The folding of the two panels on either side of the central one produces a complex interplay of reflections between the three sections, while the concave shape it creates captures light and multiplies the effect of transparency or distortion within the cluster of dots. Trudel’s choice of Plexiglas has evidently deepened her research into the materiality of colour and light, thereby opening new possibilities within the pictorial field. Moreover, their presentation in the gallery allows viewers to experience the near-sculptural nature of her paintings as they extend into the exhibition space, and to witness how dramatically their appearance shifts depending on the angle of view.

Over the past five years, her work has been presented in France, in Germany, Japan, United-States, and throughout Canada. Trudel was a two-time finalist in the RBC Canadian Painting Competition (2011, 2012), and winner of the Joseph Plaskett Award in painting (2013). Her work is included in several collections, including the Collection Prêt d’œuvres d’art of the Musée national des beaux-arts du Québec; the Ville de Montréal; RBC Bank and TD Bank. She lives and works in Montréal.

The artist would like to warmly thank the Joseph Plaskett Foundation, the Triangle Arts Association, NSCAD University and the Robert Pope Foundation, who supported the development of this new project. She would also like to acknowledge the contribution of her skilful and reliable studio assistants, Katie Lesser and Arkadi Lavoie Lachapelle, as well as Donald Thompson, Martin Schop and Atelier Clark, who helped resolve many technical challenges.