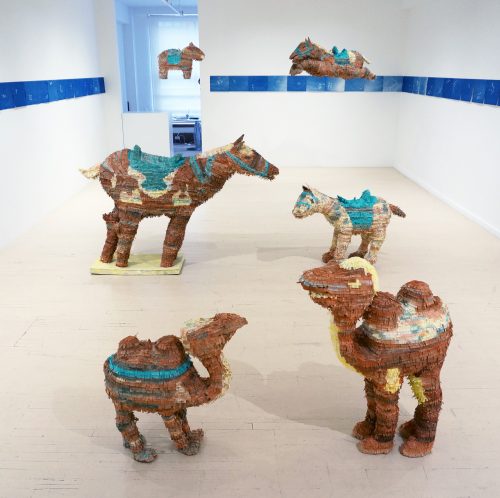 The artist’s second solo exhibition at the gallery, but the first to be exclusively made up of original works – Galerie Hugues Charbonneau is delighted to present this new installation by Karen Tam. The artist is continuing her research on the reproduction of antiquities and the commodification of Chinese culture by focusing on the imaging of cultures through their contacts and stereotypes.

The exhibition Silk Road: Storm-Detectors, Blood-Sweating Horses, and Constellations comprises a group of sculptures that borrows its technique from Mexican piñata making as well as a series of works on cyanotype paper running along the walls where they evoke blue and white Chinese ceramics. This sequence reproduces the constellations of sky maps from the Dunhuang caves (c. 650-680) that are thought to be the first graphic representation of the stars in Chinese astronomy. These various drawings apparently served, among other things, as a navigational tool for merchant caravans travelling along the Silk Road towards the West. The horse and camel-shaped piñatas, placed on the floor or suspended, are for their part intended to complicate the festive tradition of the Mexican piñata. Karen Tam juxtaposes the latter with the Chinese tradition of papier-mâché funerary offerings as well as the funerary ceramics depicting horses and camels in the Tang Dynasty (c. 600-900). Moreover, Karen Tam draws inspiration from some sources tracing the piñata’s origin back to China from where it was supposedly exported to Italy by Marco Polo then moved on to Spain, and from there to their colony: Mexico. Together, these fake ceramic tiles and papier-mâché transportation animals stimulate reflection on the intercultural impacts brought about by the Silk Road and its modernization, announced in 2015 by the Chinese department of Commerce.

The current exhibition coincides with the opening, on November 23, 2016, of a solo show dedicated to Karen Tam at the Musée d’art contemporain des Laurentides, where the artist will begin an evolving project studying the Jesuit influence on the perception and dissemination of Chinese culture in Quebec from 1920-1930. The project will continue to unfold at Expression – Centre d’exposition de Saint-Hyacinthe (2017) and at Musée régional de Rimouski (2018), as well as through a publication.

Karen Tam (b. 1977) holds a MFA from The School of the Art Institute of Chicago and a PhD from the Centre for Cultural Studies at Goldsmiths, University of London. Since the 2000s, her work has been steadily exhibited: Musée d’art contemporain des Laurentides, Saint-Jérôme (2016); The Drawing Center, New York (2014); The Mendel/Remai Art Gallery of Saskatchewan, Saskatoon (2014); The Victoria & Albert Museum, London (2012, 2011); Musée d’art contemporain de Montréal, Montreal (2010, 2008); Irish Museum of Modern Art, Dublin (2010, 2005, 2004); Art Gallery of Greater Victoria, Victoria (2007). In 2016, she was nominated for the Prix en art actuel awarded by the Musée national des beaux-arts du Québec and was on the long list for the prestigious Sobey Art Award in 2016 and 2010. Her works are part of the collections of the Irish Museum of Modern Art, Musée national des beaux-arts du Québec, Caisse de dépôt et placement du Québec, Royal Bank of Canada, TD Group, Hydro-Québec and the Canada Council Art Bank, to name but these. She lives and works in Montreal.