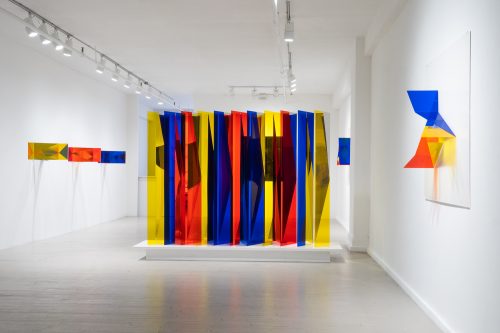 Material, volume, colour, light. These are the core components in Julie Trudel’s practice. In contemporary terms, there’s a link here to the elemental concerns and exploratory geometries of Minimalism. (The work of Donald Judd, for example, is a key reference for Trudel.) Yet, Trudel’s shaped, sculptural forms, whether wall-mounted or freestanding, channel these perceptual elements into works that expand beyond the fundamentals. It’s a process as deeply informed by her sensitivities as a painter as it is by an abiding curiosity in both the technical complexities and expansive potential of form and luminosity. Consider the triptych Triptique spécifique, where thin surface layers of backing paint and mirrored coating have been selectively removed from industrial-grade, coloured Plexiglas panels, which are then set in triangular compositions that extend horizontally from the gallery wall. Or Polyptique spécifique with its heat-molded lengths of red, blue, and yellow mirrored Plexiglas rising from the gallery floor in a screen of accumulated form. Ambient light is the active agent, seeping through and reflecting off Trudel’s angular surfaces and open volumes to create luminous plays of colour and shadow in varying intensities (Trudel calls it “painting without paint”) while at the same time implicating the viewers in their own mirrored presence. Think of these, perhaps, as a series of experimental proposals or studies in compositional contradiction, where the infinite becomes finite, and the finite becomes infinite. —Bryne McLaughlin 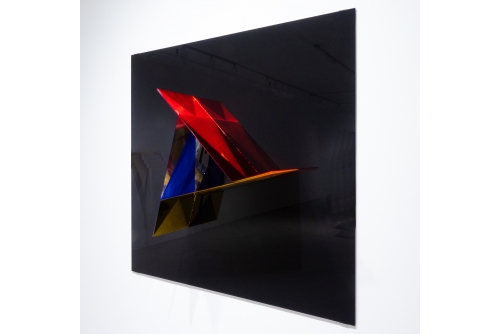 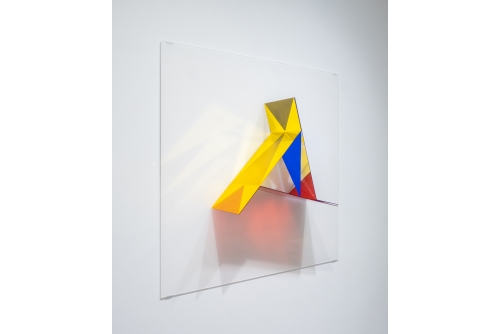 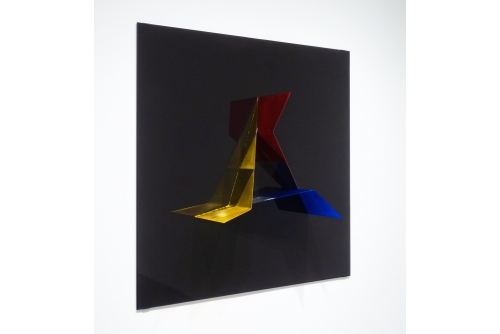 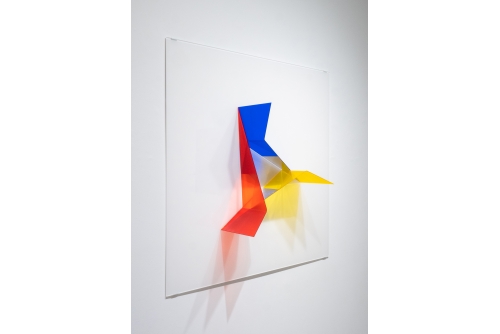 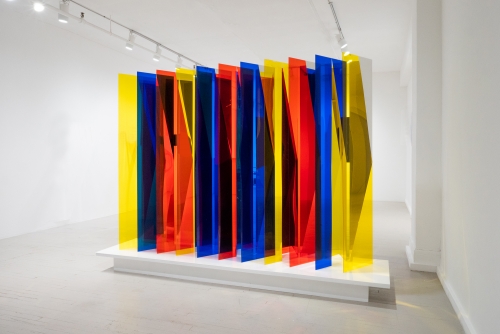 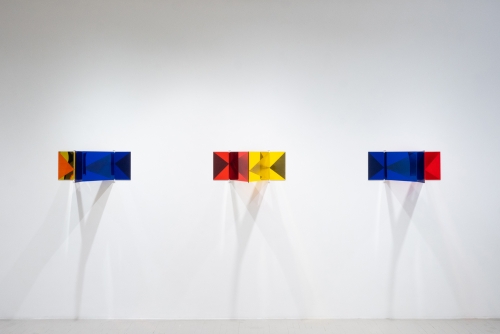 At the heart of Julie Trudel’s pictorial practice is the following hypothesis: creating work within specific procedural constraints can potentially generate remarkable new visual effects. She experiments with the properties of painting through simple work processes and self-imposed limitations established at the start of each new project. These vary from a restricted choice of palette or materials to working within a predetermined technique or compositional framework. In this way, Trudel situates herself within the realm of reflective and conceptual practices that focus on the procedural mechanics and perceptual intangibilities of painting. Her research extends to painting as a multidisciplinary practice, engaging in a study of the materials and methodologies that define painterly concerns. It’s an approach that lends new currency to traditional ideas of abstraction through works that seek to renew the technical and perceptual limits of painting, as much through its medium and presentation as in its affective result.

Julie Trudel holds an MFA from the Université du Québec à Montréal (UQAM) and has exhibited across Canada, Europe, and the United States, including a solo exhibition at NARS Foundation, Brooklyn (2018), the group exhibition Entangled: Two Views on Contemporary Canadian Painting at the Vancouver Art Gallery (2017), and The Painting Project at Galerie de l’UQAM (2013). In addition to being awarded numerous research and creation grants as well as artist residencies across Canada and abroad, Trudel was a two-time finalist in the RBC Canadian Painting Competition (2011, 2012) and winner of the Joseph Plaskett Award in painting (2013). She is a Professor at UQAM in Montreal, where she lives and works.

The artist warmly thanks École des arts visuels et médiatiques and Faculté des arts of Université du Québec à Montréal, who supported the development of this project. She would also like to acknowledge the invaluable contribution of the various studio assistants who took part in the project: Éloïse Carrier, Raphaëlle Groulx-Julien, Vincent Lussier and Maria Claudia Quijano. The technical support of Mario Baillargeon, Alexandre Bérubé, Danny Glaude, Olivier Heaps-Drolet, Geneviève Le-Guerrier-Aubry and Christine Terreault was essential as well.